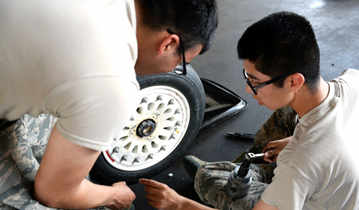 BRAC has always been a hard sell, a point borne out by the Obama administration’s failure to persuade lawmakers to authorize one or more base closure rounds over the past five years.
Maybe if the Pentagon were to broaden the aims of the BRAC process from simply winnowing unneeded infrastructure to an effort that simultaneously reinvests in the neglected facilities at enduring installations. Reconceptualizing BRAC possibly could improve its prospects in Congress, Michael O’Hanlon, a senior fellow in foreign policy at the Brookings Institution, told On Base.
A more comprehensive BRAC effort could both rightsize the military’s portfolio of installations as well as reverse the deterioration of facilities that have been underfunded in recent years as DOD has been forced to operate under a budget cap, he said. O’Hanlon views BRAC as an initiative that has been effective in the past — with some exceptions, particularly in the 2005 round — and could contribute in a moderate way to future budget savings for the Pentagon.
Expanding BRAC to include repairing and refurbishing enduring installations isn’t specifically required from a management standpoint, but the concept is worth considering if it helps convince Congress of the department’s need to shed a portion of its excess infrastructure, he added.
O’Hanlon recommends at least one, and possibly two, new base closure rounds in his recent look at how the U.S. military can maintain its global edge in national security without breaking the bank — “The $650 Billion Bargain: The Case for Modest Growth in America’s Defense Budget.”
O’Hanlon says the nation’s current spending for national security of just over $600 billion is roughly the right amount, but he also calls for moderate growth in the budget so that it reaches $650 billion in FY 2020. The administration’s current projection is for defense spending to decline to $575 billion by 2020.
Much of the discrepancy can be explained by O’Hanlon’s assumption that the department’s overseas contingency operations costs will remain at their current level.
He also calls for a halt in the administration’s plan to shrink the Army’s active-duty end strength to 450,000. The size of the regular Army currently is about 470,000 soldiers, which O’Hanlon says should be the smallest number it should reach. With the reserve components, the service should have a total of 1 million troops.
The Army’s current size is needed to handle future contingencies, O’Hanlon explained. “There is no perfect, right number,” he said, but as the service’s end strength drops, the risk increases that it becomes too small to deal with simultaneous conflicts.
“I think we’re on the cusp of that uncomfortable place,” O’Hanlon said.
While O’Hanlon calls for only modest growth in defense spending, a $650 billion defense budget would far exceed the 2011 Budget Control Act cap for FY 2020. He says there is no magic trick for achieving that target — Congress will need to come to a bipartisan agreement to surpass the caps, as it has done several times since the law was enacted.
A deal to raise the defense caps almost certainly will require political compromise, with the GOP likely retaining control of the House and the Senate too close to call but leaving the minority party in a position to filibuster legislation it opposes. Democrats will insist on raising non-defense spending caps by a roughly equal amount, a compromise O’Hanlon would support as boosting spending on education, scientific research and infrastructure benefits national security.
Unless lawmakers vote to completely revoke the Budget Control Act, they probably would need to pass two more two-year “Band-Aids” to relax the spending caps through FY 2021, the date when the statute runs out. The defense and non-defense spending limits should be raised by about $30 billion each, or by about 5 percent, he said.
“The $650 Billion Bargain: The Case for Modest Growth in America’s Defense Budget” is available from the Brookings Press.